The Man, The Myths, The Legends of Thomas Jefferson 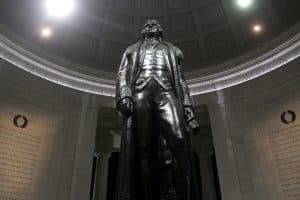 During one of my last semesters in college, I had the opportunity to work for a Senator in Washington D.C. On one occasion, my wife and I took a trip down to Monticello: the home of Thomas Jefferson. We were a little late getting out the door but made it just in time to catch the last tour of Jefferson’s estate. As we walked through his home and listened to the tour guide, I was amazed at how much Jefferson had accomplished throughout his life. He was truly one of the greatest Americans to ever live.

As we made our way around the home, we came to a room in which the tour guide said slaves often stayed. She also said something that stuck with me: “Thomas Jefferson wrote that all men are created equal, but that’s clearly something he did not believe because he owned slaves.” The tour guide then went on to talk about how Thomas Jefferson fathered an illegitimate child with one of his slaves, Sally Hemings. Of course, I had heard these things before in the media and from scholars. But when I heard these things this time, I wanted to respond and refute her accusations, because I felt, as I always have, that they weren’t true. However, I didn’t have any information to aid me in Jefferson’s defense – only a belief.

Since my time in Monticello, I have learned new information about the life and character of Thomas Jefferson. Evidence suggests that, despite what is perpetuated in mainstream media circles, it is unlikely he fathered a child with one of his slaves and that he did, in fact, believe that all men are created equal.

Thomas Jefferson Fathered A Child With A Slave

You have probably heard that Thomas Jefferson fathered one or many children with one of his slaves, Sally Hemings, and that DNA testing proved it. However, that’s not entirely accurate.

In 1998, at the time when the Clinton impeachment hearings over his lying under oath about his sexual misbehavior were beginning, a “DNA investigation” was released which “confirmed” longstanding rumors that Jefferson had fathered one if not all of Sally Hemings children.

The news media, of course, ran with the story.

“The Hemings Story, first a whisper and now a dead certainty, always made sense to me,” wrote Richard Cohen of the Washington Post.

What many people missed in the late 90s and still miss today is that Thomas Jefferson only had one son who died at birth, so there was no direct male descendent needed for DNA testing. The DNA actually tested was from Field Jefferson, Thomas’ uncle. The only thing that the study could objectively conclude was that one of the twenty-six known Jefferson males living around Monticello at the time was the father of Sally Heming’s youngest son Eston. This was a small detail that many people glazed over. In fact, after the study had been published, the researchers issued a statement acknowledging that the title of the study was misleading.

In April of 2001, fifteen scholars from prestigious universities across the country came together to examine the DNA results as well as the historical context. In their report, with the exception of a single professor, their conclusions ranged from “serious skepticism about the charge to a conviction that it is almost certainly false.”

About the initial DNA study, Mona Charen said it best in 1999:

“The DNA data did rule Jefferson out as the father of Thomas Woodson, the eldest of Sally’s sons, and shed no light on the rest. That leaves a scenario in which Jefferson’s sexual liaison with his slave is estimated to have begun when he was 65 years old [when Eston would have been conceived]. Possible certainly, but likely? While the DNA data add to our knowledge — it is clear that there was mixing of Hemings and Jefferson genes sometime in the past 200 years — they do not provide names or dates. They most definitely do not “prove” anything about Thomas Jefferson himself.”

Unfortunately, despite no actual proof that Jefferson conceived a child with Sally Hemings, the media still perpetuates the story today.

Thomas Jefferson Did Not Believe That “All Men Are Created Equal”

“Jefferson was always deeply committed to slavery, and even more deeply hostile to the welfare of blacks, slave or free. His proslavery views were shaped not only by money and status but also by his deeply racist views” – Paul Finkelman, New York Times.

Like many historical figures, Thomas Jefferson is one who is viewed through the lens of presentism, meaning that we judge him based on our morals and values today rather than those of his time period. In order to understand Jefferson’s character, we must also understand the context in which he lived. Today we understand that slavery is a horrible institution, but in the late 18th and early 19th centuries, it wasn’t that cut and dry. Case in point: Thomas Jefferson was a “consistent opponent of slavery” despite owning over 600 slaves himself.

Indeed, the Father of the Revolution called slavery a “moral and political depravity.” In 1778, years before the slave trade was abolished, Jefferson drafted a law that banned the importation of slaves to Virginia. Before the Constitution was written, Jefferson introduced a law that would have effectively ended slavery in every territory that would become a state. Unfortunately, the measure did not pass, and Jefferson wrote:

“There were ten states present. Six voted unanimously for it, three against it, and one was divided. And seven votes being requisite to decide the proposition affirmatively, it was lost … Thus we see the fate of millions unborn hanging on the tongue of one man, and heaven was silent in that awful moment! But it is to be hoped it will not always be silent and that the friends to the rights of human nature will in the end prevail.”

This is only one example of Jefferson’s writings on his opposition to slavery and his advocation for abolition. To claim that Jefferson did not actually believe in equality and freedom for all is to ignore the facts. His actions show a man striving to reform the laws and customs that surrounded him. Yet, if Jefferson was so against slavery, why did he have so many slaves, and why did he not free them after his death?

Jefferson received most of his slaves by way of inheritance. He was not a man who said one thing and then went out and bought hundreds of slaves to work on his estate.

Jefferson believed that emancipation needed to come about gradually, as it was so entrenched into the nation and would cause upheaval if it were immediately enforced. Throughout his life, he strived to make changes to the laws that would help rid the nation of slavery. Unfortunately, many laws in the state of Virginia did not allow Thomas Jefferson to free his slaves, which is one of the several possible reasons why this didn’t happen.

However, toward the end of his life, when Jefferson saw that his efforts had made little dent in ending the scourge of slavery, he wrote to his associate Edward Coles on the subject:

“My opinion has ever been that, until more can be done for them, we should endeavor, with those whom fortune has thrown on our hands, to feed and clothe them well, protect them from all ill usage, require such reasonable labor only as is performed voluntarily by freemen, & be led by no repugnancies to abdicate them, and our duties to them. The laws do not permit us to turn them loose, if that were for their good: and to commute them for other property is to commit them to those whose usage of them we cannot control. I hope then, my dear sir, … you will come forward in the public councils, become the missionary of this doctrine truly christian [abolition]; insinuate & inculcate it softly but steadily, through the medium of writing and conversation; associate others in your labors, and when the phalanx is formed, bring on and press the proposition perseveringly until its accomplishment.”

Jefferson had to deal with the circumstances he found himself in. He did not go about seeking to own slaves because he enjoyed the idea of subjecting men against their will to his authority. His writings and actions show the contrary. Unfortunately, today, whenever we discuss the legacy of Thomas Jefferson, slavery and racism are almost always some of the main topics.

The Character of Thomas Jefferson

I do not profess to be a historian. There is still much I have to learn about the Sage of Monticello and our nation’s history. However, it is dangerous to focus on the negative aspects of historical figures and events (which is what modern media tends to stress) while ignoring many of the facts and good things that create a more complex narrative. To make it clear: I do not believe that Thomas Jefferson was a perfect man. Just like all of us, he had his flaws. He said and did things that were wrong. I do believe, however, that he was a man of great character and strength who was devoted to the cause of liberty for all men. I do believe that many have attacked his character as a way to subvert the ideals for which he stood or to gain political influence.

Thomas Jefferson has had more than his fair share of attacks during his life and they continue to this day. During his life, he never felt the need to respond. Consider what he wrote to his friend Uriah McGregory in 1800:

“From the moment that a portion of my fellow citizens looked towards me with a view to one of their highest offices, the floodgates of calumny have been opened upon me; not where I am personally known, where their slanders would be instantly judged and suppressed, from a general sense of their falsehood; but in the remote parts of the Union, where the means of detection are not at hand, and the trouble of an inquiry is greater than would suit the hearers to undertake.

I know that I might have filled the courts of the United States with actions for these slanders, and have ruined perhaps many persons who are not innocent. But this would be no equivalent to the loss of character. I leave them, therefore, to the reproof of their own consciences. If these do not condemn them, there will yet come a day when the false witness will meet a judge who has not slept over his slanders.”

We live, so to speak, in the “remote parts” of Jefferson’s Union. That is, we live over 200 years apart. It is much more difficult for us to make an inquiry into his character today than it was during his lifetime. We have first-hand documents that give us a glimpse into the mind of our nation’s third president, but few take the time to read them. But if Jefferson chose not to respond to critics, then why should I? I, like Jefferson, believe that the truth will prevail. However, in today’s day and age, someone has to be bold enough to proclaim and defend it.

PrevPreviousThanksgiving: The Forgotten Holiday
NextYou Have Done That Yourself: A Lesson From Star WarsNext