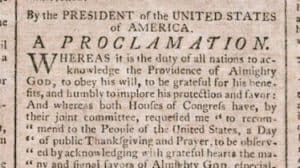 Turkey, stuffing, football, family, Black Friday shopping, Cyber Monday deals, and setting up Christmas decorations. These are probably the things that come to mind for most of us when we think about Thanksgiving. Then, when someone asks us about why we celebrate Thanksgiving or about the true meaning of it, we usually say that it’s to give thanks for our blessings. We also say that it’s a celebration of the Pilgrims and the Native Americans peacefully sitting down and celebrating together, right?

Well, that’s a part of it. But that’s not why we celebrate Thanksgiving today. Thanksgiving, as celebrated in the United States, is actually quite a patriotic holiday. But it seems that we have forgotten this and replaced it with our a desire for material and frivolous things.

Just over a year ago, my wife and I lived in Washington D.C. One of the best experiences we had while we were there was visiting George Washington’s Mount Vernon. We walked the grounds, watched some of the films, and visited most of the exhibits. What made the greatest impact on my wife and me was the exhibit on Washington’s Thanksgiving Proclamation given on October 3, 1789. The whole Proclamation can be seen on the Mount Vernon website, but the most powerful section of it reads:

Now therefore I do recommend and assign Thursday the 26th day of November next to be devoted by the People of these States to the service of that great and glorious Being, who is the beneficent Author of all the good that was, that is, or that will be– That we may then all unite in rendering unto him our sincere and humble thanks–for his kind care and protection of the People of this Country previous to their becoming a Nation–for the signal and manifold mercies, and the favorable interpositions of his Providence which we experienced in the course and conclusion of the late war–for the great degree of tranquility, union, and plenty, which we have since enjoyed–for the peaceable and rational manner, in which we have been enabled to establish constitutions of government for our safety and happiness, and particularly the national One now lately instituted–for the civil and religious liberty with which we are blessed; and the means we have of acquiring and diffusing useful knowledge; and in general for all the great and various favors which he hath been pleased to confer upon us.

If you didn’t read the quote because it is long, I highly suggest you go back and do so read. When I first read this, I was shocked and amazed. I had no idea that George Washington ever dedicated a day in November for giving thank, specifically thanks to God. In school, I had just learned about the Pilgrims and Native Americans making peace and eating food, and somehow a turkey made its way in there.

From reading this Proclamation, we learn that Washington wanted to unite the people in giving thanks to God for winning the war, for having peace, for the Constitution and government, and for civil and religious liberties. To me, this suggests that Thanksgiving is much more than a day to be grateful for our material possessions. To me, it suggests a day for us to reflect on the freedoms and liberty we enjoy, and to acknowledge God’s hand in providing and preserving them.

Thanksgiving As A Holiday

Washington’s Proclamation did not establish Thanksgiving as a national holiday. However, many presidents following Washington set forth similar proclamations for days of thanksgiving.

It wasn’t until the Civil War that Thanksgiving became a national holiday on the heels of a similar proclamation given by Abraham Lincoln. The nation had suffered so much division and heartache that Lincoln felt compelled to issue another proclamation, 74 years to the day that Washington had set forth the first.

In this Proclamation of Thanksgiving, Lincoln declared:

I do therefore invite my fellow citizens in every part of the United States, and also those who are at sea and those who are sojourning in foreign lands, to set apart and observe the last Thursday of November next, as a day of Thanksgiving and Praise to our beneficent Father who dwelleth in the Heavens. And I recommend to them that while offering up the ascriptions justly due to Him for such singular deliverances and blessings, they do also, with humble penitence for our national perverseness and disobedience, commend to His tender care all those who have become widows, orphans, mourners or sufferers in the lamentable civil strife in which we are unavoidably engaged, and fervently implore the interposition of the Almighty Hand to heal the wounds of the nation and to restore it as soon as may be consistent with the Divine purposes to the full enjoyment of peace, harmony, tranquillity and Union.

Similar to Washington’s proclamation, the purpose of this proclamation was to unite the people in giving thanks to God and to ask for his help in restoring peace and union.

Over the years, Thanksgiving has become known as the holiday before Christmas, a time to get the best deals for Christmas gifts, and the day after which you can justifiably listen to Christmas music. Don’t get me wrong, Christmas is great. But from my observations, we have lost sight of the history and significance of Thanksgiving.

Citizens during Lincoln’s presidency certainly had much to complain about with the way things were going. But I’m certain many of them listened to the counsel of their wise President and turned their hearts to God with thanksgiving and praise. At a time where the nation was much divided, many of those that came before us chose to turn to God and focus on hope and unity.

Today, our nation needs that feeling of Thanksgiving that both Washington and Lincoln described – the acknowledgment of God’s hand and to implore Him to heal the division and ailments that has taken root within our society. This Thanksgiving, I invite you to join me in reflecting on and giving gratitude for the influence God has had on our great country and for the freedoms which we enjoy. Additionally, I hope that gratitude can be shown, not just on one Thursday of the year, but in how we live our lives.

PrevPreviousDo Not Go Gentle Into That Good Night
NextThe Man, The Myths, The Legends of Thomas JeffersonNext