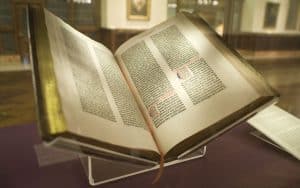 The title is something that should be obvious, right? But apparently, it is not. Over the past several weeks, as Evan McMullin has gained momentum in Utah, it seems that many people have been there to assert that Utah voters need to “get off their high horse,” to “stop throwing stones,” and that “God can use Donald Trump for good.” Using these religious sentiments is laughable at best, but many people use them quite seriously. You can vote however you want, just don’t use religion as a defense for a candidate who has serious and disturbing character flaws. Here are the main religious arguments I have heard recently in defending Donald Trump and why they are flawed.

God Can Use Trump For His Purposes

The argument that I hear the most is that God can “use” Donald Trump for His will. Many people point to God using Saul (Paul) or harlots to accomplish His purpose. The biggest thing that many using this argument overlook is the condition of the heart of the individual. God uses people when they are willing to listen. Saul was a very devout man who thought he was doing the right thing until he was shown otherwise. Donald Trump, on the other hand, has said: “Why do I have to repent? Why do I have to ask for forgiveness if you’re not making mistakes?” How could God possibly use someone who never thinks he is wrong? Doesn’t it say in Romans 3:23, “all have sinned, and come short of the glory of God?” What makes anyone think that Donald Trump will change all of the sudden? His arrogance and pride keep God from being able to use him as an instrument. Isaiah tells us that the Lord dwells with “with him that is of a contrite and humble spirit.” Neither of those adjectives describes Donald Trump.

Similarly, if God can “use” Trump or sinners for His purposes, doesn’t that mean that God should be able to use Hillary Clinton as well? Clinton claims to be a religious person so that standard should also be applied to her. In my mind, Trump and Clinton are cut from the same cloth. Both are morally bankrupt and corrupt people. Both are self-serving individuals who will say or do anything to be elected. Those are the kinds of people that God is somehow supposed to use? Trying to use Trump as an instrument would be like trying to corral a toddler throwing a temper tantrum. And trying to use Clinton would be like trying to get a bratty teenager to listen and obey. I don’t envy the task.

The Founding Fathers Were Immoral So We Should Support Trump

Most people that argue this point do so in the context of Thomas Jefferson. Their claim is that “because Thomas Jefferson had illegitimate children with one of his slaves, Sally Hemming, we should accept the character flaws of Donald Trump.” There’s only one problem with this argument: it’s based on a false premise. Many historians agree (and the facts confirm) that Thomas Jefferson did not have children with one of his slaves. It was most likely one of his brothers who frequently danced and played music with the slaves and was at Monticello around the time Sally Hemming conceived. This is a narrative pushed by the left that most people have come to believe over the years. While Jefferson certainly had his flaws, it is absurd to compare the character of Donald Trump to a man who wrote the Declaration of Independence and heavily influenced the Constitution (through James Madison).

This is one of my favorites. This is often used as a call to “stop judging” Donald Trump because we have all made mistakes. The context comes from John 8:3-8 in the New Testament. A woman is brought to Jesus who is accused of adultery, having been caught in the act. Her accusers assert that the law demands that she be stoned, but they ask for His perspective. Jesus then says, “He that is without sin among you, let him first cast a stone at her.” None of the Pharisees do anything because they were “convicted by their own conscience”, so they leave. Jesus helps her see that no one has condemned her and then says, “Neither do I condemn thee: go, and sin no more.”

Many people take this to be a forgiveness of her sins from Jesus. If that were the case, wouldn’t Jesus say, “your sins have been forgiven you,” like He does every other time in the New Testament? Jesus does not forgive her but admonishes her to leave her sinful ways – in effect, He calls her to repentance. So in the case of Donald Trump’s sexual misbehavior, we certainly shouldn’t cast stones (which is the equivalent of condemning to death), but we should be able to ask for his resignation from his candidacy. Additionally, very few people are actually casting stones. The majority of people are just so fed up with all the garbage that goes on. Of course, people are going to “judge.” We do that every day. The final judgment, however, is reserved for God. But it is absolutely our responsibility to discern between what promotes good and what promotes hate and evil.

One last concluding remark – when I was younger, I was told that you should stand up for what is right even if no one stands up with you. It seems like many people that should know this principle have forgotten it. I have watched many people that I respect turn into something they are not because of this election. Donald Trump and Hillary Clinton have divided this country, and have brought out the worst in us. It pains me (and makes me laugh) to see people come to their defense (mostly Trump’s) to defend their candidate’s behavior with religious sentiments.  If you want to support Donald Trump, by all means, go ahead. We can have a difference of opinion. But don’t use religion as a defense for a man who spews hate and violence. If you want to make an argument why Donald J. Trump should be president, do it on grounds of policy or leadership experience.

PrevPreviousDear Fellow Citizens: Please Do Your Homework
NextDo Not Go Gentle Into That Good NightNext