Finding A Job: Faith and Works 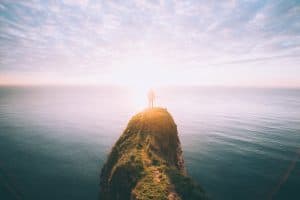 Have you ever hit a wall in a job? Not literally, well, maybe some people have, but I mean have you ever felt like you aren’t moving anywhere and feel somewhat trapped? That’s how I felt at the beginning of 2016. I had just come back to a job working for BYU’s IT department after a semester off working as an intern in the U.S. Senate. I worked as a supervisor in the computer support department, and it paid pretty well for a college job. On paper, it looked like a good student job. But after my stint on Capitol Hill, I felt like I needed to start moving in a new direction.  Additionally, my wife, Cassidy, and I had decided that this was the year we would get ready to have little baby Gundersens running around. In order to do this, I felt like I needed to step up to the plate and bring home more bacon than I currently was.

In February, I figured I would start looking for jobs when I had time. I never had a problem finding a job (not to pat myself on the back), so I didn’t worry to much about it. In the beginning, I casually asked God to help me find something that would put me and my family in a good position for the future.

My prayers became more earnest, and I worked harder than ever to find a job. I had plastered my resume all over the internet and on every job listing site I could find. I applied for so many jobs that I completely lost count. One day, my wife suggested that I just quit my job, and focus on building the skills and the resume that I would need to land the job I wanted. She assured me that as long as I was making an effort and moving forward, God would provide assistance. “Are you crazy?!?!” was something similar to my response. My wife had just received a new full time job and assured me that we could manage for a while until I found something.

I was still uneasy about it, because I have always had a job since I was 14 years old. But I knew she was right, so I did the unthinkable. I quit my job with nothing to fall back on. (Technically, I had some freelance work lined up, but that didn’t work out in the end.) I left many friends, a good wage, and a type of work that I knew pretty well. I took a leap of faith and hoped that if I did everything in my power to find work, God would lend me a hand.

Finally, the world started to work for me instead of against me! Many companies got back to me, and I had four interviews in the course of a week. One of these companies was a digital marketing company called SkyRocket Media, which my brother in-law told me about. I found a full time job listing for the company LinkedIn but didn’t think I was qualified. I decided to apply anyway, because what could it hurt? (Again, advice from my wife- she’s a smart one.)

It turns out that got the job! Although I did not have the qualifications that many other candidates had, the company was more concerned about whether or not I had the right mentality to set and achieve goals and bring value to the firm. So after many months of having a job and not being able to find a new one, I found myself not having a job and able to find a new one. This went against everything I had been taught and believed as a young adult. You NEVER quit your job until you have one already lined up. But I learned a very important lesson: things will work out if you put in the time and trust God.

My transition to SkyRocket Media could not have been at a better time. The hours I was to work at my BYU job were about to be less than desirable; I had just finished up the school semester which allowed me to work full time hours; The company offered a lot of great benefits and room for personal growth that no other company I applied to offered. All that time that I struggled and stressed about providing for my family paid off. Call it coincidence or happenstance, but I believe that God cares about what matters to us in our lives, and that He’s willing to help us bring about the things we need and want. However, we still have to do our part to make it happen.

Many of us fall into one of two camps.  We either say: “God, tell me what I should do, and I’ll do it!” And then do nothing about it. Or, we try to do it all on our own without asking for assistance. There needs to be a middle ground. When we put in the time and effort and do our part, I’m certain that God is more willing to lend us a hand. On the other side of that coin, he is also more able to help when we stop trying to do it all on our own and trust Him. That’s why we need faith and works – not just one or the other.