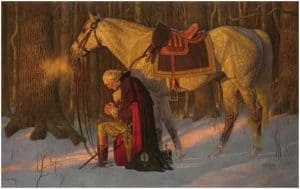 Our nation was founded upon Judeo-Christian values. Anyone who believes otherwise has obviously not studied American history, nor the lives of those noble men who helped shape the country. However, today we find that many opinion leaders and talking heads ignore the obvious evidence in pursuit of radical agendas. As a result, religious freedom is under attack on many fronts. I fear that if we don’t remember our history and that it was God who protected and preserved us as a nation, we could lose the right to believe and practice as we feel, which is one of the very reasons why the Constitution was established in the first place.

I write this post because over the past several months and years, our nation has descended further into moral and spiritual darkness. I have struggled especially over the last several months and the circus that is the presidential election. Rather than commenting on either of the two individuals running on the major party tickets, I want to focus on two individuals whom we should look to as examples when considering our vote. Additionally, my hope and prayer is that each one of us can think about what we can personally do to bring God and morality back into the public square.

First, I want to talk about George Washington. Arguably one of the greatest men that has ever lived on this earth, he is my hero and role model. Many in academia argue that he was an atheist, but that could not be further from the truth. During the Revolutionary War in May of 1776 General Washington ordered his troops:

“The Continental Congress having ordered Friday, the 17th instant, to be observed as a day of Fasting, Humiliation, and Prayer, humbly to supplicate the mercy of Almighty God, that it would please him to pardon all our manifold sins and transgressions, … and finally establish the peace and freedom of America upon a solid and lasting foundation…”

George Washington believed that if the Americans were to win the war, they could only do it with the help of God. And to obtain the Divine aid they sought, they must bring their lives in line with God’s commands.

During his first term as President after the war, in what we be known as the Thanksgiving Proclamation, Washington set apart November 26th, 1789 as “a day of public thanksgiving and prayer devoted to the service of that great and glorious Being who is the beneficent Author of all the good that was, that is, or that will be.” More specifically, it was a day to thank God for his hand and protection through the war and for His influence in establishing the Constitution.

George Washington was a deeply religious man – a man who put his country and his God before his own interests. Washington never wanted to lead the Continental army against the British. He wanted to stay at his home in Mt. Vernon. After the war, he didn’t want to be involved with the government but thought that others should lead. However, when his country and his God needed him, he answered the call.

A man who exemplifies this ideal of doing what is right no matter the cost is Abraham Lincoln. Abraham Lincoln was not a popular man with those in Washington. In fact, many have argued that he won the presidency simply because the Democratic party was fractured between the North and the South. I believe he became President because God needed him. Lincoln was willing to submit his will to what God wanted.

Initially during the Civil War, Lincoln and the Union army were fighting to keep the Union together. In fact Lincoln campaigned on the promise that he would not abolish slavery. However, as the war grew more and more bleak and intense, Lincoln came to understand that God wanted him to abolish slavery from the land.

In a book called The Lincoln Hypothesis, author Timothy Ballard relates a conversation Lincoln had during a meeting with a congressional delegation during the war in which Lincoln said:

“I not only believe that Providence is not unmindful of the struggle in which this nation is engaged; that if we do not do right, God will let us go our own way to ruin; and that if we do right, He will lead us safely out of this wilderness, crown our arms with victory, and restore our dissevered union, as you expressed your belief… I think He means that we shall do more than we have yet done in furtherance of His plans, and He will open the way for our doing it. I have felt His hand upon me in great trials and submitted to His guidance, and I trust that as He shall further open the way I will be ready to walk therein, relying on His help and trusting in His goodness and wisdom.“

Lincoln did not initially want to abolish slavery, because it was not politically favorable for him. However, as he felt God’s hand upon him, he knew that it was the right thing to do and what he must do. As he began to steer the nation toward abolishing slavery and providing equal rights for all under the Constitution, Lincoln’s life turned into a living hell. Many of his friends and allies deserted him, he lost two of his sons, some of his generals were insubordinate, and he watched as soldiers returned from battle with severe mortal wounds.

Through it all, Lincoln stayed true to the cause, and paid for it with his life. He took a broken and fractured nation that was so entrenched in sin and evil and snatched it from the brink of destruction through his submission to God’s will. I hope that one day I can consistently choose to do what is right no matter the cost just as Lincoln did throughout his life.

With those (very brief) discussions of Washington and Lincoln in mind, think about our current election. How do the candidates compare? Do we believe that either of them have the integrity of General Washington or President Lincoln? Do we believe they will trust that God will guide them through difficult times, and that they are willing to submit to His commands?

I believe that we should not settle for leaders who do not come close to the characteristics of George Washington and Abraham Lincoln. We should demand integrity and morality from our leaders. If we don’t, then the negative consequences that come about due to immoral and unrighteous leaders are our fault.

When you voting for someone you hate less than the other, you are not standing for anything. If we want America to succeed, we must stand for principle. The Founding Fathers stood against impossible odds in the war against the all-powerful British Empire. Anyone who has studied early American history knows that the Americans SHOULD NOT HAVE WON! But we won because our leaders and the people were on God’s side.

No matter what happens in the coming days, months, and years, we must remember to be on God’s side and to support leaders who are on His side as well. We cannot espouse to be Christians and at the same time justify voting for someone who does not look to God for strength and help in his or her weaknesses. Choosing the lesser of two evils is still choosing evil. Rather than choosing evil, I invite everyone reading this to choose what is right, and God will work out the rest. Even if the odds seem impossible, when we trust and follow God, He will protect and preserve us and our nation.

PrevPrevious24 Reasons Why You’re The Best
NextDear Fellow Citizens: Please Do Your HomeworkNext