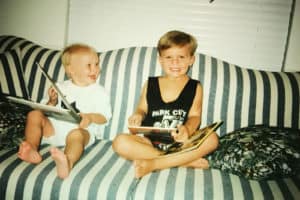 I was just a kid when John Stockton and the Utah Jazz were competing in the NBA Finals against Michael Jordan and the Bulls. And when I say kid, I mean that I was 5 years old. However, I have very vivid memories of watching the games, cheering when the Jazz scored, and playing on my indoor hoop at the commercial breaks.

John Stockton was my favorite. Growing up, I tried to pattern my game after his. Unfortunately, I didn’t get any help from genetics in the height department, so my basketball career never really took off. But I still loved watching John Stockton play up until his last day in a Jazz uniform. I was lucky enough to see him play his last game at the Delta Center against the Sacramento Kings in the 2003 playoffs.

Last year, my wife bought me John Stockton’s autobiography, Assisted, as a birthday gift. I finally got around to reading it and learned some great life lessons from the career of an NBA great.

Motivated by a desire to win and to always do his best, John Stockton made a competition out of everything. Whether he found himself in drills, in practice, in games, and even in routine medical examinations, the hall of famer always brought his A-game. Stockton’s ability to compete and push himself even when the stakes weren’t high is one of the main reasons why he became the NBA all-time leader in assists and steals.

Similarly, if we want to have a similar level of success in our lives, business or personal, we need to be willing to compete at a high level. This competition does not always need an adversary. In fact, we should focus on competing against ourselves rather than those we come in contact with.

Are we willing to do the little things to compete every day in order to be our best? Log off social media and work on that side project. Stop browsing the news and connect with your family. Get off YouTube and organize your life. As evidenced by his legendary basketball status, doing the little things when no one is watching bring great rewards.

Stockton talked a lot about his relationships with his teammates and Utah Jazz staff. He had positive things to say about everyone he mentioned and even had personal stories to share. He was not an island in his success but attributed much of it to those around him.

However, toward the end of his career, Stockton expressed dismay at how team relations were toward the end of his career. With new tech gadgets, everyone seemed to go into his own shell on flights, at the hotels, in the locker room, etc. John felt that he had a chance to change that culture because of his seniority and leadership role, but he didn’t. And he regretted it. He also expressed regret in not telling his longtime go-to man Karl Malone about his decision to retire before it was announced in the press.

If John could go back, I’m sure he would change things. The good news for us is that we can make the choice not to miss those opportunities to build and maintain relationships.  Life isn’t all about basketball, work, or our possessions. It is all about our relationships.

A favorite tagline of current Jazz rookie Donovan Mitchell, Stockton never talks about humility in his book. It’s his tone that gives you a glimpse into his humility. The title of his book is Assisted which is a reference to all the people who helped him achieve success in his life and his career. Throughout the book, he speaks in glowing terms about his coaches, mentors, friends, teammates, and family.

John Stockton is one of the greatest point guards of all time, and yet in his book, he chooses to highlight everyone around him that gave him a helping hand.

Pride and ego can destroy lives and careers. There are so many athletes that faded into nothing because they got too cocky. The same thing can happen to us if we don’t stay humble. Seeking out assistance and acknowledging those that do help are great ways to help us stay humble as we strive towards our goals.

4. Growth Is In The Journey, Not The Victory

It’s hard to talk about John Stockton being one of the best point guards to ever play in the NBA without addressing the obvious: he never won a championship despite having made it to the NBA finals twice. But as Stockton says, “I value my journeys to the NBA Finals despite the outcomes. I believe that most winners treasure their journey as highly as their victory.” He goes on to say that “small and unpublicized daily preparation and effort lie squarely at the center of why those treks hold such intrinsic value.”

Of course, it hurts to come up empty-handed, especially when you’ve given something your all. Luckily, for most of us,  we don’t only have one or two shots at obtaining whatever we seek. In the words of Winston Churchill, “Success is not final, failure is not fatal: it is the courage to continue that counts.”

That courage to continue despite whatever obstacles or failures we face has the ability to change who we are. It often makes the journey worth it, even if we don’t win the prize.

I have to admit when my wife first gave me the book, I wasn’t super excited about reading it. Autobiographies are not among my favorite genres of books. However, I learned a lot of applicable things from John Stockton’s life that I’ve been able to apply to my own. If you need a good book, Assisted is one to put on your list.

What have you learned from a book you have recently read?

PrevPreviousDisconnected: How Social Media and Technology Leave Us Feeling Empty
Next3 Basic Principles To Help You Manage MoneyNext