Central To The Creator’s Plan 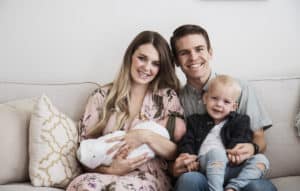 I’m currently writing this while holding my second child in my arms as she sleeps. She hasn’t slept too well (and neither has mom) the past couple of days because our toddler insists that the whole neighborhood hear his demands for attention.

Some of you may be thinking, “Well you did this to yourself, dummy. You had kids early on in your career, so you’re not going to be able to do whatever you want whenever you want.”

You’re exactly right. I can’t always do what I want, but I wouldn’t trade this for the world.

I don’t give you a glimpse into my life for sympathy or attention. I do it to highlight a truth on my mind since my daughter’s birth: “the family is central to the Creator’s plan for the eternal destiny of His children.”

This obviously comes from The Family: A Proclamation to the World, a document far ahead of its time. In the time since its adoption by the First Presidency and the Quorum of the Twelve Apostles, we have seen the ubiquitous prevalence of pornography as well as anti-family legislation of various kinds. We need not wonder where these efforts come from. As Elder Bednar taught in this past general conference: “The adversary works relentlessly to attack the elements of the Father’s plan he hates the most.”

What are the things that Lucifer will never have which bring about eternal joy? A body, a companion, and children. It should come as no surprise then, that he would work overtime to stop the creation of families before they even begin. As Joseph Smith allegedly once prophecied: “the time would come when none but the women of the Latter-day Saints would be willing to bear children.”

It appears that this day may be drawing nigh, as we have seen increasing fanaticism over having children and the end of the world due to global warming. But unfortunately, we also see members of the Church who are putting off marriage and children for worldy pursuits.

I want to make clear here that I am not trying to “judge” anyone. I don’t presume to know the circumstances of others; my heart truly aches for individuals who lack opportunities to be married and for couples who struggle with infertility or a number of other complications. The law of Restoration declares that if we do our part to keep the commandments and our covenants, all that was lost or withheld from us through no fault of our own will be restored.

With extenuating circumstances aside, the Lord has declared through His servants: “The first commandment that God gave to Adam and Eve pertained to their potential for parenthood as husband and wife. We declare that God’s commandment for His children to multiply and replenish the earth remains in force.

Contrary to what has become popular in the world on the subject of having children, we learn from God’s servants that He has not changed His command. That command to multiply and replenish the earth applies to us, just as it did to Adam and Eve.

But I can understand why someone wouldn’t want to have kids. They’re very needy. They can be incredibly annoying. Some days you don’t get enough sleep. And if you want to be a good parent, sometimes you have to miss out on things you want to do to support your kids. The list could go on.

But I will tell you what – there is nothing better than coming home after being away and having your son say, “Daddy! I missed you!” and giving you a big hug. Or when he says, “Daddy, come play basketball hoop!” Or when your daughter nestles her head against your chest and drifts peacefully off to sleep. It truly makes me sad for individuals who won’t experience these joys because of their own choices, and even more sorrowful for those who can’t due to circumstances outside of their control.

The Coming Days For Families

I’m no prophet, but I don’t imagine that the days ahead will become easier for families. But I do know that the Prophet of the Lord recently remarked that “there are difficult days ahead” and to “Please protect your families from the deception you will see in your future.” Indeed, deception is increasing around us. What was wrong is now right. What once was right is now wrong. The ways of the world have never been so appealing. Satan would love nothing more than to stop families from beginning and putting an end to those that have already commenced along the path.

So what is to be done?

Know the Word of the Lord

It is not enough to go to Church on Sundays (now only two hours) and expect to learn all we need to know to be ready for the attacks from the adversary. Gospel learning has now become family-centered and Church-supported. The Come Follow Me curriculum serves as a great guide to learning and understanding the scriptures. For the past year, my wife and I have been studying the Old Testament with the institute manual. (We’re still only in 2 Samuel. The Old Testament is long…) By doing this, our gospel knowledge has greatly expanded. By understanding the covenants God made to His early people, we understand how our little family fits into the history and the gathering of Israel much more than we did before.

One of my 2 year old’s favorite songs is “Follow the Prophet.” Why? Probably because we made up some actions and he loves doing them. Hopefully, as he grows older, he can grasp the meaning of the words. It seems like we’re on track because every time he sees an old man at a pulpit he says, “Pop-pop Nelson!” (Prophet Nelson). But I digress.

There is great wisdom in following the prophet. As the song states: “We live in a world where people are confused/if you don’t believe it go and watch the news.” To escape that confusion and the deception of the adversary, we must follow the prophet. But how can we be sure that the prophet will not lead us astray? First, we must obtain a personal testimony of the current President of the Church as God’s authorized spokesman on the earth. Then we can have confidence in following the prophet’s counsel.

If we are to lead ourselves and our families through the attacks of the adversary and to safety, we must be willing to reject Babylon in favor of what the Lord has declared through His prophets. Such living requires humility.

Contrary to what the world would say, humility is not a sign of weakness. Humility is accepting that we might not have all the answers; we might be wrong; someone else may know better than we do. But it is only through humility that the Lord can teach us and guide us.

As President Joseph F. Smith taught: “It is not by marvelous manifestations unto us that we shall be established in the truth, but it is by humility and faithful obedience to the commandments and laws of God.”

When we are humble, we strip away our pride and prejudices that would keep the word of the Lord and His servants from entering into our hearts. Rather than saying my will be done, we can say let thy will be done.

Having a family is the greatest joy and blessing I have ever experienced. Yes, it is difficult some days, but I wouldn’t trade it for all the fame and riches this world has to offer. Unfortunately today we see that many are drawn away by the fame and the riches that the adversary promises if we will but delay these important decisions. But we need not be deceived. Satan is no match for the humble follower of Christ (and the prophet) who knows and understands the word of the Lord.